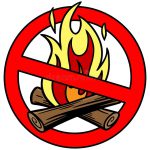 All residents please be advised that due to extreme dry conditions throughout the province, District of Katepwa has issued a Level 2 Fire Ban as of Tuesday May 18, 2021.

The Level 2 Fire Ban order will remain in place until conditions improve and the fire ban can be lifted.

The burning of debris, refuse, and construction materials is prohibited at all times within the boundaries of the District of Katepwa.

Open burning in the District of Katepwa is banned.

Exemptions to a level 2 fire ban, (with a plan to extinguish a fire) are:

A Bylaw for Enacting A Fire Restriction Or Fire Ban